What’s better than bringing together members from the community and local precision medicine experts to discuss genetics and genomics in medicine? Bringing community members and local experts together over a fascinating film screening to enjoy popcorn and casual conversation.

In April 2017, the Center for Applied Genetics and Genomic Medicine (TCAG2M) partnered with the Center for Innovation in Brain Science to put on the first installment of Genes on Screen. The activity was designed to screen the documentary Twitch, which follows the journey of 18-year-old Kristen Powers as she decides to undergo genetic testing for Huntington’s disease.

Twitch delves into Kristen’s story and her mother’s disease, showing heart-wrenching images and stories of her mother slowly deteriorating as Huntington’s takes hold. At the age of 18, Kristen was legally allowed to be tested for the condition and decided to chronicle the life of someone grappling with a chronic condition and her genetic testing path. Kristen’s engaging story highlights the emotional, social and medical journey through genetic testing, as well as the impact it has on one’s future. Twitch also explores the science of Huntington’s disease with experts and activists who provide deeper insight into the complexities and hopes buried in the disease.

“The ‘Twitch’ documentary works on so many levels,” says Dr. Linda Restifo, Professor of Neurology, Neuroscience, and Cellular and Molecular Medicine at the University of Arizona College of Medicine – Tucson and member of TCAG2M, who spearheaded the effort to bring Twitch to the Tucson community. “First and foremost, it gives an emotionally compelling picture of the family experience when a parent has a serious genetic disease, and the children are at risk. It's also very informative about Huntington's disease and genetic testing. This is a film that everyone can appreciate." 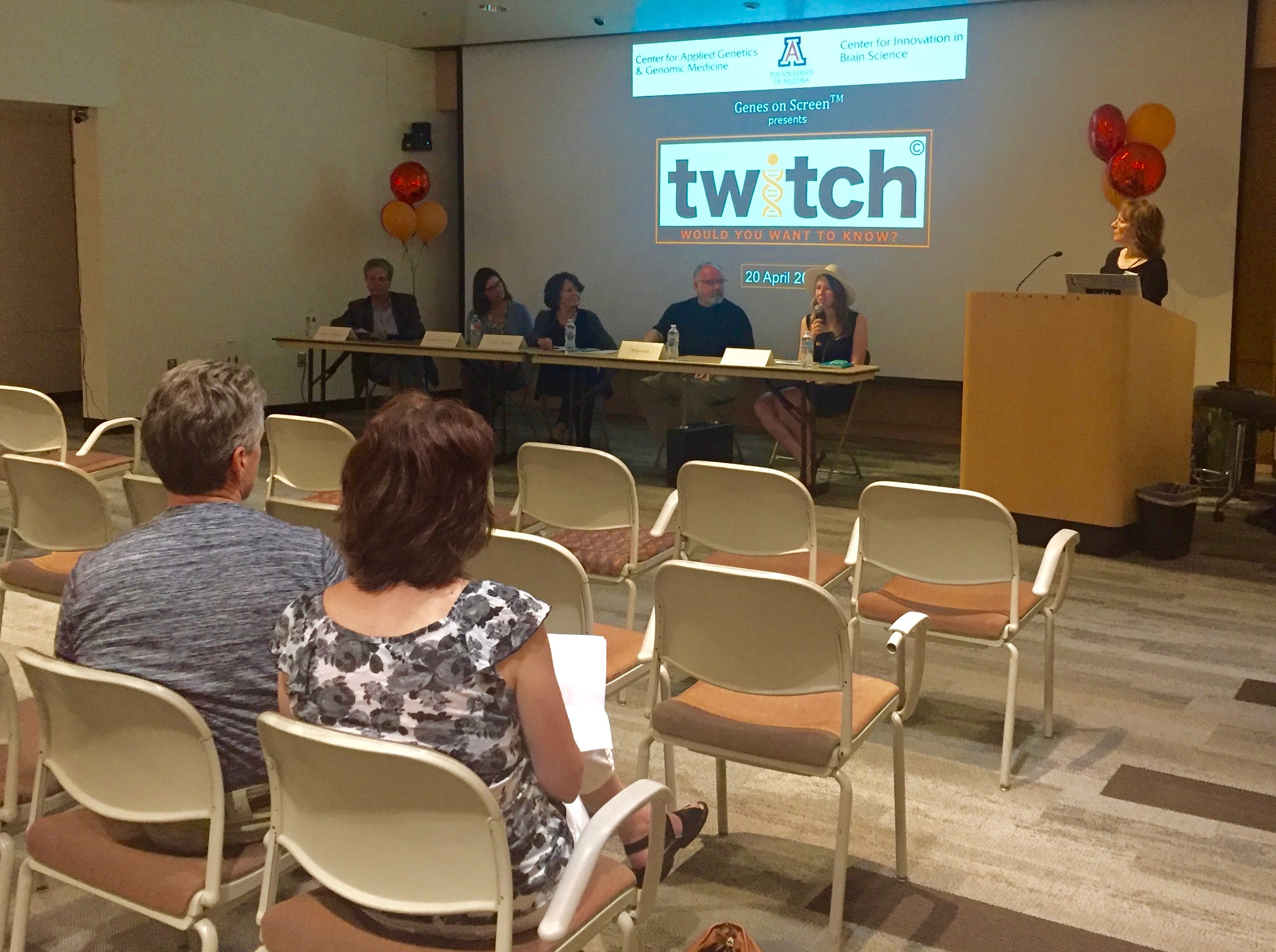 The first Genes on Screen brought together a diverse group of individuals representing the University, the local Huntington’s disease network, and the community at large to learn more about this condition and genetic testing in general. In addition to the screening of Twitch, audience members heard a first-hand account from Kristen Powers about what it was like to document such an intensely private decision on film, and about her and her family’s journey. Following the presentation, a panel discussion featuring local experts in genetics, neurology and patient advocacy answered audience questions about Huntington’s disease and genetic testing. Panelists included Leslie Benson, MS, CGC (Genetic Counselor in the UA Department of Obstetrics and Gynecology), Phillip Hardt, MA (Phoenix-based Huntington’s Disease Advocate), Christina Laukaitis, MD, PhD (Associate Professor in the UA Department of Medicine), Kristen Powers (filmmaker and Huntington’s disease education activist), and Steven Rapcsak, MD (Professor in the UA Department of Neurology).

In the future, Dr. Restifo will be working with the leadership of TCAG2M and its Community Engagement Division to turn Genes on Screen into an ongoing series. “The audience response to our first Genes on Screen presentation was extremely positive!” she stated. “It made me realize we could develop a whole series of events, using film and panel discussions to introduce the public to a wide range of issues in genetics, which is one of the pillars of precision medicine.”

“Genes on Screen is a great opportunity to engage and educate the community,” says Dr. Irma Ramos, Director of the TCAG2M Division of Community Engagement and Associate Professor of Health Promotion Sciences. “A major goal for this and other programs in our division is to provide education at all levels in the areas of genetics, genomics and precision medicine.  We look forward to improving health outcomes through increased literacy in these important areas of modern medicine.”

“TCAG2M is excited to work with Dr. Restifo and other members of the TCAG2M Division of Community Engagement to launch Genes on Screen to engage with our local community. We look forward to continuing this ongoing series in the future so that physicians and researchers can partner with the local community to learn about important issues in genetics and genomic medicine,” says Dr. Kenneth Ramos, TCAG2M Director, Associate Vice President for Precision Health Sciences, and Professor of Medicine.

For more information on upcoming Genes on Screen or other TCAG2M community activities, please visit http://precisionhealth.uahs.arizona.edu/events.