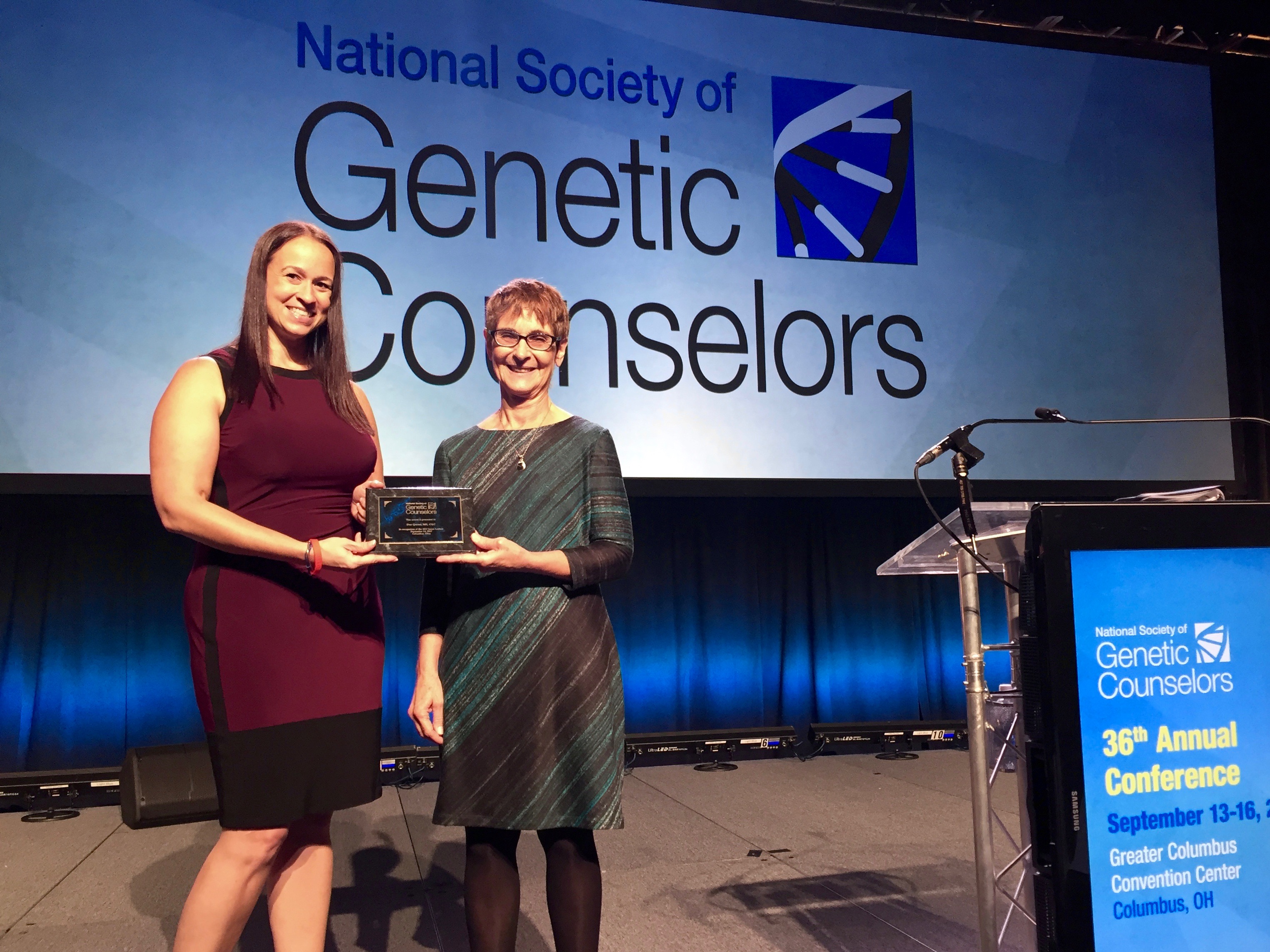 Dee Quinn, MS, CGC, Director of the University of Arizona Genetic Counseling Graduate Program, received the Janus Lectureship at the 2017 annual meeting for the National Society of Genetic Counselors (NSGC). Named for the Roman god, Janus, who is depicted with two faces, one facing the past and the other looking to the future, the Janus Lecture is awarded each year at the NSGC Annual Conference to a genetic counselor working in a specialty area of genetic counseling to provide insight into the past, present, and future of their field.

Ms. Quinn’s lecture spoke about the history and the future of the field of teratology. For over 35 years, Ms. Quinn has worked as a specialty genetic counselor in teratology, a field of medicine that studies birth defects resulting from the interaction between genetics, environmental exposure, and other factors. In her lecture, Quinn spoke about two future directions that she sees in the field. First, the importance of increased funding and focus on the role that exposures during pregnancy have on fetal development and second, the use of pharmacogenomics testing in clinical medicine, and how this has the potential to substantially influence the future of personalized health care.

Christine Stallman, MS, CGC nominated Ms. Quinn for the 2017 Janus Lecture. “Nominating Dee for the Janus Lecture was a no-brainer,” said Ms. Stallman. “Not only is the field of teratology one that needs to be more widely recognized and discussed in order to better serve pregnant and lactating women, but Dee herself deserves long-overdue recognition as a contributor and expert in the field to which she has dedicated her career. For me, it was a way to shine a spotlight on an important topic and a true mentor, teacher, exemplary genetic counselor.”

“We are immensely proud that Dee Quinn was awarded the 2017 Janus Lectureship,” said Kenneth Ramos, MD, PhD, Director of the University of Arizona Health Sciences Center for Applied Genetics and Genomic Medicine. “Dee has been a leader in the field of genetic counseling and teratology for decades. Her work developing and directing genetic counseling graduate programs, as well as providing teratology counseling has been extremely valuable to the field and the University of Arizona.”

Quinn received a BSN degree from the University of Bridgeport in 1975 and her Master’s degree in Genetic Counseling from Sarah Lawrence College in 1981. Since coming to the University of Arizona in 1989, she has provided prenatal and teratology counseling. She served as President of the Organization of Teratology Information Specialists from 1999-2001 and Executive Director from 2005-2012. Ms. Quinn is a member of the National Society of Genetic Counselors, the Association of Genetic Counseling Program Directors, the Organization of Teratology Information Specialists and the Teratology Society. In addition to directing the Genetic Counseling Graduate Program at UA, Ms. Quinn is also a Senior Genetic Counselor and Lecturer in the Department of Obstetrics and Gynecology, Lecturer in the UA College of Pharmacy, and Director of the Mother-To-Baby Arizona pregnancy risk line.