Taking the Fight to the Molecular Level: The Human Genome Is Our Greatest Weapon 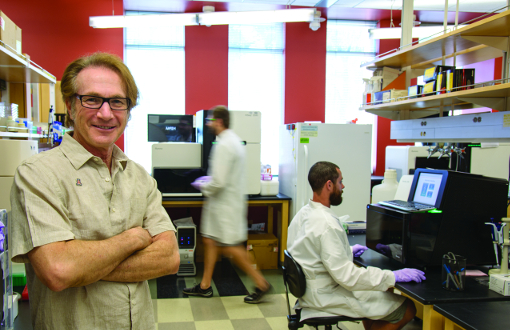 At 7:30 on a Tuesday morning in June, Room 2920 at the University of Arizona Cancer Center’s research complex in Tucson is one of the busiest places on campus. Doctors, pathologists, radiologists, nurses and social workers fill every seat at the expansive conference table, connected via video conference to team members 116 miles up Interstate 10 in downtown Phoenix. A gray-scale graphic overlaid by a data set is projected onto a large screen and is being scrutinized by the group. At a casual glance, those familiar with the world of cancer care will recognize this gathering as a standard tumor board meeting. A tumor board is a multidisciplinary group of experts who meet to discuss particular cases for which an oncologist needs guidance — for example, brainstorming treatment plans for a patient with difficult cancer.

Tumor boards are a staple in the world of oncology. The American College of Surgeons first established tumor boards in the 1920s in an effort to develop a multidisciplinary approach to comprehensive cancer care. They are divided into areas of expertise that focus on specific cancer types, such as lung, colon or breast. Oncologists present a case to the group and experts weigh in on best approaches to care and offer information on any clinical trials that may be available to that particular patient.

Something is fundamentally out of the ordinary about this particular tumor board meeting, however. A number of faces seem out of place, and the image projected onto the screen has different data than usual. One of these new faces is Michael Hammer, PhD. He is not a clinician, a radiologist or a pathologist. He is not a nurse or a social worker. In fact, he does not even have a background in oncology. But he is the one who is leading the discussion, and his rapt audience is hanging on his every word.

Dr. Hammer is an expert in human genetics, director of the Division of Technology and Innovation at the Center for Applied Genetics and Genomic Medicine is the director of the UA Genetics Core, an on-campus group that helps UA researchers conduct specialized genomic analyses. He has a unique insight into the particular cancer case under review, and possesses information that until recently was not available to the rest of the group: information that will change the way tumor boards diagnose and treat cases like the one under review this morning. The information in Dr. Hammer’s possession has to do with the genes that give rise to every tumor — genes that can be analyzed molecule by molecule, using equipment that isn’t a normal part of an oncologist’s lab. For this reason, this tumor board is formally referred to as the molecular oncology tumor board (MOTB). In contrast to a standard tumor board, an MOTB allows oncologists to take into consideration the number and types of mutations in tumor cells, treating the disease as one of genetics rather than focusing solely on a cancer’s location in the body.

Molecular Oncology Tumor Board in Action

Given the growing interest in the field of molecular oncology, the UA Cancer Center established its own MOTB in 2016. In its first year, the MOTB was presented with 23 cases, one of which was a 9-year-old boy. After experiencing night sweats, coughing, shortness of breath and weight loss, the patient was diagnosed at the UA Cancer Center with a rare and aggressive cancer known as gray zone lymphoma. Unfortunately, because it is so rare, no agreed-upon guidelines exist for how best to treat patients diagnosed with it.

The patient went through aggressive chemotherapy and radiation, but despite his physicians’ best efforts, his condition worsened.

“We were faced with a very challenging situation because the patient showed a very high resistance to conventional chemotherapy agents we had tried, and we had very few options given the limited therapies known in the literature,” says Yi Zeng, MD, PhD, the patient’s oncologist.

That’s when Dr. Zeng reached out to Dr. Hammer and his colleagues. Tumor sequencing revealed variants in the HDAC7, CIITA and STAT6 genes, and sequencing of the patient’s normal cells revealed inherited genes that may explain his unusual resistance to chemotherapy. This information allowed Dr. Zeng and the transplant physician, Emmanuel Katsanis, MD, to develop a personalized treatment plan that allowed the patient to achieve remission following bone marrow transplant.

Not all cancers are alike. In fact, even cancers that strike the same area of the body aren’t identical. In the past, our limited knowledge about cancer led to a generic, one-size-fits-all approach to treatment. So a treatment that was approved for use in patients with breast cancer may work well in some cases but not in others. And we often didn’t know why a treatment did or did not work, nor could we predict the success or failure of that treatment in a particular patient.

In 2001, the Human Genome Project was completed — a scientific breakthrough that unlocked the genetic code and gave us the ability to sequence our own DNA. This was a new technology that empowered humanity to discover specific genetic mutations that underlie a myriad of human conditions, including cancer.

Since then, with the advent of next-generation sequencing methods, creating genetic profiles of tumors has become routine, and cancers often can be further subdivided by mutation type. This is precision medicine in action, zeroing in on specific mutations to classify increasingly precise subtypes of cancer. Patients with tumors resistant to standard therapy, or who have a cancer so rare that treatment options are limited, might benefit from a tumor board with a focus on genomics that involves a broad array of experts in genetics, bioinformatics, bioethics and genetic counseling to discuss the implications of genetic sequencing results.

The Next Generation of Tumor Boards

A typical MOTB meeting at the UA Cancer Center has two parts. First, an oncologist presents a case to the core group for consideration; second, for cases that previously had been submitted for sequencing, the board discusses the results, focusing on their scientific impact and whether the case would fit into a case series for publication. Attendees debate the possible influence of specific mutations and whether a particular drug might work. Oncologists involved in clinical trials will weigh in on whether an experimental drug is the right match for the patient. Usually, two or three patient cases are discussed at each meeting.

Depending on how many genes are being sequenced, the cost of a molecular profile of a patient’s tumor can range from $1,000 to $3,000. About 1 percent of our genome is made up of genes that code for proteins; mutations in these genes can lead to diseases like cancer. A comprehensive 500-gene cancer panel covers a custom set of genes associated with cancer risk, treatment and prognosis. Another type of sequencing, called clinical exome sequencing, examines all protein-encoding genes, as well as other pertinent areas of the genome, to detect harmful mutations in a tumor — making it easier for oncologists to understand how to diagnose and treat a challenging case of cancer.

Finally, gene expression profiling looks at the sequence and abundance of RNA, the genetic information used by the body to make proteins. This type of sequencing can confirm the presence of genetic mutations, as well as genes or pieces of RNA that have been fused together to create abnormal proteins.

Future Directions: Where We Go from Here

Each new case brought to the MOTB adds to a growing data set of known gene variants linked to specific tumor types. While molecular technology continues to move forward at a fast pace and our database of tumor variants is growing, pharmaceutical companies and the UA Cancer Center’s own drug developers are also on an urgent mission to come up with new drugs.

But there are still many gene variants waiting to be identified. Detecting newly discovered variants in our own patients is at the core of the mission of the UA Cancer Center’s MOTB.

“We believe that an enhanced focus on the MOTB will aid in the development of a multi-pronged effort to enlarge our capacity for discovery at the UA Cancer Center in the area of precision medicine efforts,” says Dr. Hammer. “Given the plethora of cases of common resected diseases that have been sequenced, it is very important to prioritize the operational features of our MOTB.”

Dr. Hammer is working with researchers throughout the UA Cancer Center to prioritize a growing list of questions that could be addressed in future MOTB casework. For example, the MOTB may choose to sequence rare tumors as a case series or from patients with multiple cancer types, or to learn about tumor evolution by taking samples from the same patient at different time points to track changes in the tumor’s genes. Another approach would be to compare the genomic profiles of people with the same type of cancer but with very different outcomes, or to monitor a tumor’s genomic response to treatments.

As Dr. Hammer so aptly says, “To make the most of the research, we have to ask the right questions and sequence the right people.”

Understanding they cannot perform all tests on all patients, Dr. Hammer says the MOTB should focus on full genetic analysis of tumors. Working up a full genetic profile of a patient’s tumor will “provide research-level information for scientific discovery and, at the same time, has the potential to help oncologists to direct patients toward specific clinical trials.”

To be fair, genetic sequencing and other precision-medicine approaches are by no means a “silver bullet.” Many discoveries remain to be made, and a number of criticisms and cautionary tales must be taken into account. This is still a very new technology, however, and with every case the molecular oncology tumor board at the UA Cancer Center is giving each patient a new means to fight for their own health as well as the health of others.

“Our MOTB provides a nuanced level of detail not found in sequencing reports from a commercial company or a hospital lab,” Dr. Hammer says. “Because we are a research lab, we can take a deeper look and sequence all of the genes in the tumor as well as those in the normal cells, which can help us to distinguish variants that are new to the tumor from those that were inherited and shared with other family members.”

Genomic sequencing is a new technology and is not part of the standard of care for cancer patients — and is therefore not always covered by insurance plans. The high return on investment, however, can make the hefty price tag worth it. The information provided to doctors and researchers decreases reliance on arbitrarily chosen treatments for patients and helps oncologists make decisions guided by scientific research. It also provides patients with a direct connection to phase I trials and drug development programs that may offer access to cutting-edge experimental treatments.

For researchers, sequencing capabilities and the MOTB facilitate translational bench-to-bedside research — the process of applying scientific discoveries to a patient’s care. And for patients and their families, the MOTB means they’re working with a team whose members have skill sets that reach far beyond the standard of care and into the raw genetic code of the human blueprint.

This article originally appeared in the Fall 2017 issue of Act Against Cancer.