Electronics That Vanish in the Body 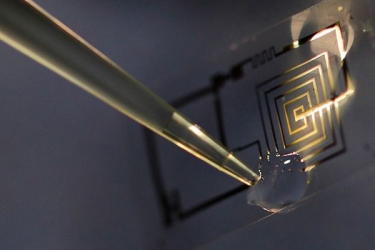 UA physician and biomaterial expert Dr. Marvin J. Slepian is part of a team that has developed biodegradable electronics that could revolutionize medicine, environmental monitoring and consumer electronics.

Physicians and environmentalists alike could soon be using a new class of electronic devices: small, robust and high performance, yet also biocompatible and capable of dissolving completely in water – or in bodily fluids.
Researchers at the University of Illinois, in collaboration with Tufts University, the University of Arizona and Northwestern University, have demonstrated a new type of biodegradable electronics technology that could introduce new design paradigms for medical implants, environmental monitors and consumer devices.

“We refer to this type of technology as transient electronics,” said John A. Rogers, University of Illinois engineering professor, who led the multidisciplinary research team. “From the earliest days of the electronics industry, a key design goal has been to build devices that last forever – with completely stable performance. But if you think about the opposite possibility – devices that are engineered to physically disappear in a controlled and programmed manner – then other, completely different kinds of application opportunities open up.”

Three application areas appear particularly promising. First are medical implants that perform important diagnostic or therapeutic functions for a useful amount of time and then simply dissolve and resorb in the body. Second are environmental monitors, such as wireless sensors that are dispersed after a chemical spill, that degrade over time to eliminate any ecological impact. Third are consumer electronic systems or sub-components that are compostable, to reduce electronic waste streams generated by devices that are frequently upgraded, such as cell phones or other portable devices.

“Many of the devices we implant into patients are only needed temporarily,” said Dr. Marvin J. Slepian, a practicing cardiologist and professor of medicine at the UA Sarver Heart Center with a joint appointment in the UA department of biomedical engineering. “Once the medical need for them has passed, biodegradable devices would disappear, without the permanent burden for the body.”

Slepian, who has had a long-standing collaboration with Rogers, said the biodegradable device technology came out of previous research on stretchable electronic circuits that can be placed on balloon catheters for cardiovascular treatments.

“At the time of development of stretchable electronics it became clear, ‘Why don’t we take this technology a step further and make it altogether biodegradable?’” Slepian said.

As reported in the Sept. 28 issue of the journal Science, the researchers have already demonstrated several system-level devices, including a fully transient 64-pixel digital camera and an implantable applique designed to monitor and prevent bacterial infection at surgical incisions, successfully demonstrated in rats.

Slepian said that such transient medical devices could also help prevent infections after surgery, and open up new therapies, for example using devices that gather and transmit data for a speficic time and then are absorbed by the body when their job is done.

“We are thinking about marrying this technology with existing devices, for example the Total Artificial Heart, which was developed here at the UA,” he said. “It’s a life-saving system that has worked really well, but in a sense, we’re flying blind. After the device is implanted, we set it to a certain pumping rate and monitor the patient and see how they’re doing.”

“Ideally, we’d like to be able to implant transient sensors along with the device, for example pressure sensors that keep track of the blood pressure in the pulmonary artery or the aorta for the first two weeks after surgery. This would help immensely with the management of such patients,” he said.

Other potential medical applications range from catheters that dissolve once they are no longer needed to temporary sensors measuring kidney or lung function.

Transient electronic systems harness and extend various techniques that Rogers’ group has developed over the years for making tiny, yet high performance electronic systems out of ultrathin sheets of silicon. In transient applications, the sheets are so thin that they completely dissolve in a few days when immersed in biofluids. Together with soluble conductors and dielectrics, based on magnesium and magnesium oxide, these materials provide a complete palette for a wide range of electronic components, sensors, wireless transmission systems and more.

The team has built transient transistors, diodes, wireless power coils, temperature and strain sensors, photodetectors, solar cells, radio oscillators and antennas, and even simple digital cameras. All of the materials are biocompatible and, because they are extraordinarily thin, they can dissolve in even minute volumes of water.

The researchers encapsulate the devices in silk.  The structure of the silk determines its rate of dissolution – from minutes, to days, weeks or, potentially, years.

Since the group uses silicon, the industry standard material for integrated circuits, they can make highly sophisticated devices in ways that exploit well-established designs by introducing just a few additional tricks in layout, manufacturing and supporting materials.

“If you make silicon thin enough, it becomes degradable,” Slepian explained. “In these micro-devices, all you need are silicon connections to move electrons around. There is no need for them to be thick and permanent.”

Slepian pointed out that transient devices are a "green technology" that would help reduce much of the medical waste that currently goes to landfills.

Next, the researchers are further refining these and other devices for specific applications, conducting more animal tests, and working with a semiconductor foundry to explore high-volume manufacturing possibilities.

“It’s a new concept, so there are lots of opportunities, many of which we probably have not even identified yet,” Rogers said. “We’re very excited. These findings open up entirely new areas of application, and associated directions for research in electronics.”

Slepian has a long history of research and development with biodegradable biomaterials. In the late 1980s, he developed a process referred to a "Polymeric Endoluminal Paving and Sealing," which was the prototype for the first form of biodegradable stenting. Unlike conventional metal stents, which are used to keep blood vessels open after they were cleared of blockages, the biodegradable paving lines the inside of the blood vessel, similar in concept to a cast.